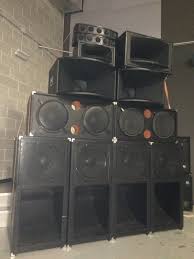 Jah Lion is a roots reggae dub sound system based in the mountains of the italian Alps. It also represents a connection and a unity of good friends and positive people around Italy. We play reggae vibes for spreading Jah Message of limpid Truth all over against worldwide "new world order" slavery and oppression. We promote the best roots reggae of all ages with full passion and, trough the deep power of our hand-made wall of boxes, we try to shake cosciences of all people.

Luca, selector and owner of the sound, started playing his records collection in 1997 for small open air dancehalls around Como Lake and Milan with few boxes and old equipment. In the early '00s sound system was upgraded with the original Jah Trinity bass scoops boxes brought to Italy from England by King David Warriors sound system during the 90s. Lately they have been refurbished as new with patience and care. Jah Lion crew is composed by Luca, Ale Namless_A from Piacenza, Anthony Irie Meditation from Massa Carrara, Baro MC from Bergamo & Phil Roots from Varese, owner of "One in the Spirit" and "Saint Francis" records labels.

Jah Lion played everywhere in Italy, sharing Jah Love with a lot of friends and forward in UK & Switzerland. In 2011 the crew had the honour to play at the legendary London Notting Hill Carnival on the Mighty Jah Observer sound system for his last year in UK.

Jah Lion official Mc is Baro since long time but we also work with different Mcs and singers and we can provide international line ups with different UK and international selectors and artists to play alongside the sound system. Contact Jah Lion for bookings and projects by filling the form on the "Contacts" page, or via the following e-mail address: jahlionsound@gmail.com